Hello, everyone – I’m Pasadena. I’m an experienced coach under the Rocket League Coaching Discord. I have coached many people both in and outside of the server, and I like to consider myself a good coach, with a fantastic approach to individual learning styles and understanding my mentees. In this editorial, I’ll be writing a piece on the theory of learning in Rocket League – follow this piece wisely, and use it to make the most out of receiving coaching, practising and improving in Rocket League.

How To Get Good At Rocket League – A New Perspective

Firstly, I’d like to introduce you to a new perspective of learning in Rocket League. This will help you to make sense of my understanding of skillsets seen in different ranks. Like any skill, we improve mainly through practise and through observation. Rocket League is subject to many variations of plays, styles and scenarios due to it being a physics-based game.

Consider the following: for the first time in an online match, you see somebody air dribble, this maneuver manages to shatter your defenses and award the opposing team with a goal. Now that you’ve seen someone make this play, you know that such plays are possible, and will be mindful of them in the future. As you become more and more resilient to these air dribble attacks, your opponents will adapt accordingly, and will try to create nuances in this play to beat you once more, such as faking the air dribble or blocking the clear. The competitive meta is a constant tug-of-war, and in order to succeed, you should be mindful of this – make note of any plays that outwit you and learn to defend against them: consider your actions. 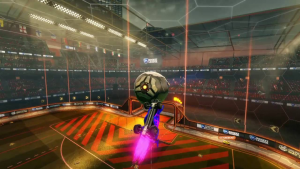 Suppose now that we liken the skillsets within Rocket League to the alphabet, and place them in order of difficulty, in arbitrary fashion. For example, A could be analog stick control, B could be flipping, and K could be ceiling shots. If we were to list every minute detail about Rocket League in this, of course we’d need close to an infinite number of letters to work with, so we’ll try to keep it down. 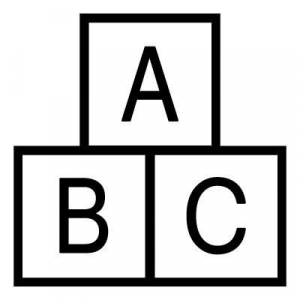 I believe, although it evolves as the meta changes, that each rank encompasses a specific few of these letters. Perhaps Bronze encompasses A, B and C. I also believe that you should imagine this alphabet to be foundational, such that you must achieve C before D, D before E, and so on and so forth. Now that you have this in your mind, let’s move ahead.

Understanding the Rocket League Meta for Your Tier

In psychology, the four stages of competence, or the “conscious competence” learning model, relates to the psychological states involved in the process of progressing from incompetence to competence in a skill. Source: Wikipedia. 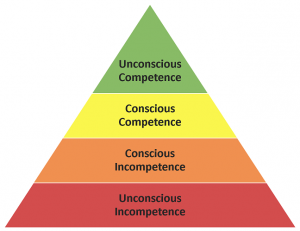 If you’re serious about wanting to improve in Rocket League, you should learn to love this triangle, and also understand it. I will refer to the four sections in 1a as UC, CC, CI and UI for their respective acronyms.

Consider the aforementioned Bronze player, whose play encompasses skills A, B and C. Skills like E, say wall shots, will remain in the red zone, or UI for this player. UI, or Unconscious Incompetence, is whereby you are making mistakes and you are unaware of them or not implementing the skill at all. Eternally toxic players will remain in red, since they fail to realise their own mistakes and blame others for them. Don’t be this kind of player; it is disruptive to your learning and your teammates’ experiences. If you ever feel like you’ve hit a ‘wall’ in Rocket League, then you’re probably in UI about something – get someone to check it out! It is also worth noting that you will remain in UI regarding plays you’ve not encountered before, or were totally unable to stop – you learn nothing from a play not actually beating your defense, but rather you being miles away from it in the first place. A failure to realise this is endemic within Rocket League coaching, as a plethora of inquisitive and ambitious souls request to play Solo Duel against a high-rated player, and tell their masochistic minds that they learnt something in the process of being beaten 14 to 0 – it helps no one: remember these skills are foundational.

Now consider the Bronze player tackling skill D: basic dribbling. This player may very well have mastered A, B and C, but are very much in the orange zone: Conscious Incompetence; CI. To be in CI regarding a skill means to be aware of your mistakes/that you’re making them. This differs from UI, since the learner is aware of their mistakes. There are a few sub-stages to UI to consider:

It is important to understand that coaching, through means such as replay analysis or study, can only take you to the top-end of CI; a coach cannot put the hours in for you, and neither can they help you much when it comes to the yellow or green zones. Take note of this in your mind; make the most out of your coaching by making sure you are at the top end of UI before finishing your session with them – any good coach should be able to illustrate this. A good coach will make you aware of a few improvements can and should be made at your level; a good mentee will process this information and apply themselves to it, returning only when they feel they’re comfortably competent with the skill they were previously working on. Receiving coaching every day, or trying to improve too fast, will only work to your detriment.

To demonstrate the yellow zone, Conscious Incompetence: CC, we’ll consider skill C. Let’s imagine that our Bronze friend hasn’t quite mastered C yet, but is well on their way. If they are diligent, they’ll be consciously competent during their games regarding skill C. What does this mean? Well, in order to break a bad habit or establish a new one, whether it be muscle memory or mode of thinking, you must resist the urge to do so, and implement the new one appropriately. CC is just this; CC is actively and consciously thinking about making decisions in game in order to become better at implementing it. This can be tricky, daunting and quite disruptive – it will be very disruptive to begin with. With time, however, you will more quickly be able to implement this skill competently in game, until it becomes a nearly unconscious.


But wait – there’s more. What about green: Unconscious Competence; UC? This process sort of happens dynamically. You will achieve UC when you no longer have to think about completing an action, or you do so for such a short time that it’s negligible – do you have to consciously think about holding accelerate? 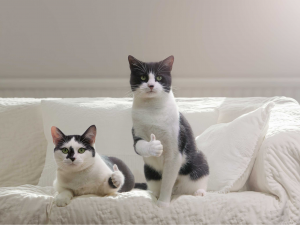 If you follow this process of coaching, either through the RLCD, or by yourself, and getting to the top of CI, then grinding through to the top of CC, up until UC, then I promise that you will make far more use out of your hours, and will likely improve much more quickly than your peers. Do your best to keep your whiffs excuse-free and understand why each and every play occurred in the fashion it did. Save your replays and look at what skills are being used against you. Play against people slightly above your rating and try to see what tactics they’re implementing that are giving you trouble. If you take up the mantle and do these things, then you will be in a fantastic position to fly through those ranks – one red skill might just be the difference between Platinum III and Diamond I.


If you consider the picture above, you’ll see two coaches from the RLCD approving this method of learning.

Applying This Theory To All Rocket League Ranks

Where else can I apply this understanding in Rocket League? Well, everywhere. I like to separate Rocket League into two types of game or sections: microgame and macrogame.

With each type being incredibly important in understanding the patterns within your respective rank and figuring out why you’re there.

Microgame covers all things mechanical and configurable, from your ability to flick the ball to the configuration of your deadzone and camera settings. Microgame is incredibly important to keep on top of, both to keep the game enjoyable and consistent. Professional players are incredibly in-tune with their microgame, and it really comes as a result of a lot of practise, which means lots of hours if you want to be on their level. Microgame is still subject to time-use-efficiency, though: use your time efficiently to practise on specific mechanical aspects of the game, and you’ll once again be ahead of the game.

It is important to not put too much emphasis on improving your microgame, or mistaking poor macrogame for poor microgame and vice versa. There are many players trapped within their rank despite their microgame being excellent, and this can happen to the best of us if we become stuck in a rut. Practise fundamental and exotic mechanics ad infinitum, paying attention to the levels of competency, and you will succeed. 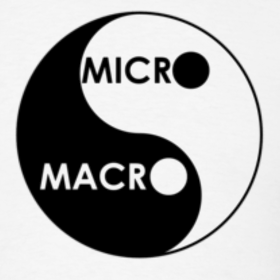 Macrogame asserts itself within the deeper understanding of the game: rotation, where and when to flick the ball and why we do these things. Macrogame is arguably a more important factor of your rank, as is exhibited in the Solo Duel playlist. Improving your macrogame, thankfully, requires far less time than your microgame, although it demands a deeper understanding. Coaches and more experienced players will be well-equipped to explain the macrogame observed in your respective ranks – and how to conquer it.

A brilliant way to improve your macrogame over time is to play conscientiously: pay extra close attention to your teammates; analyse the play; be a hawk on the field. Aside from explicit tutorials regarding macrogame, even watching professional players’ games and taking notes is a marvellous way to improve your understanding. If you use your time rightly, then you can quickly become a macrogame connoisseur; if you don’t, you cannot expect to improve, be this with -or without- a coach.

In order to take full advantage of this method of learning, first make sure you understand the content fully. Read and re-read any parts you lack understanding of, or ask for explanations via other mediums, such as aural ones, if needed.

Make sure to schedule yourself. If you wish to coach yourself or be coached, then create a schedule. It doesn’t have to be fancy, or rigorous – just make a promise to yourself that you’ll commit to this style of learning on a regular basis.

Do not play too much; it’s very easy to become overly engaged with the gripping story of Rocket League (and uncover the mystery of those weird egg people) and play for a few too many hours. Regular breaks will ensure you have time to process the information. In the event of tilting or losing your nerve, then take some time out to consider your situation before trying again.

Finally, if you’re set on improving at Rocket League, then use all resources at your disposal. There are plenty of training maps, tutorials, coaches and altruistic minds out there who’d be happy to help. Have some humility – do not miss out on an opportunity to learn! Visit the RLCD for a myriad of resources and such persons, and engage with the community discussion, if you dare.

For all you teachers and learners out there, here’s a couple of quotes to send you away with.

“There are no secrets to success. It is the result of preparation, hard work, and learning from failure.” – Colin Powell

“A good teacher can inspire hope, ignite the imagination, and instill a love of learning.” – Brad Henry