What’s going on Rocket League Fam! Wayprotein here to drop some Rocket League Trainer Pack recommendations today. Back around 4 months ago, Rocket League Coaching Discord Staff dropped an epic posted called The Ultimate Training Pack Guide For Diamond and Below Players. It was a huge hit in the Rocket League Community

The post by Chupa49 was meant for Diamond and below players, so when Chupa approached me to compile this post, I was hyped to get started. This guide is for the big boys. Whether you are new to the Champ Ranks or a Grand Champion looking to refine your skills and looking for new challenges I have included them all. 40+ videos and recommendations in total. Let’s get started! 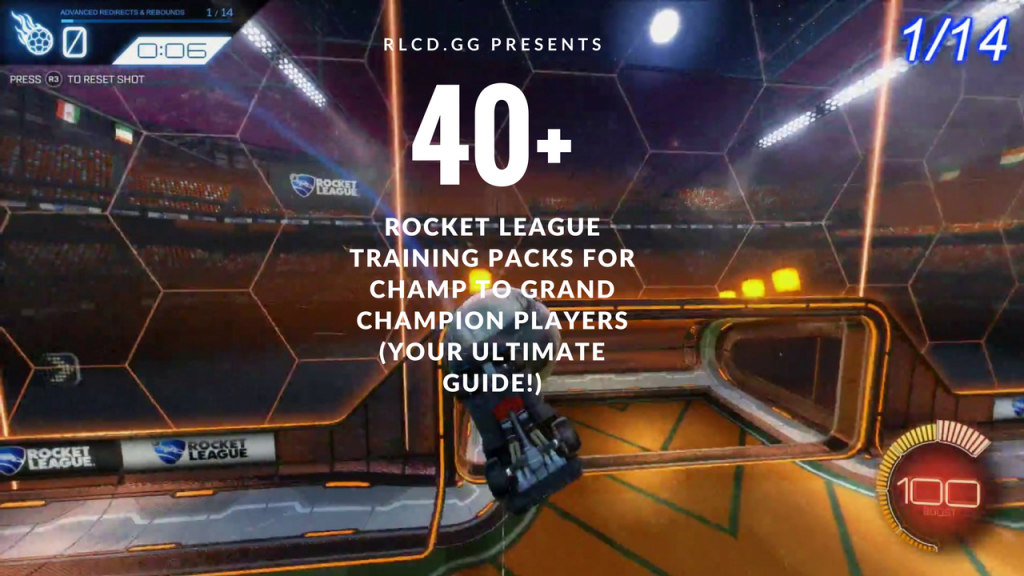 Okay, so at this point I would assume that you know how to air dribbling competently. Chupa’s post offered a lot of great intro packs that would have gotten you familiar with air dribbling. For this level play, it’s mostly about pushing for a new challenge so what better way to push your stuff and challenge a world record!

No training pack here. Below is proof of Hexz air dribble record currently at 13:02. Can you beat his time? Watch the video, fire up free play (or a private match), and go for the record!

There are times when the ball is near the net, but you need to adjust quickly in order to hit the ball quickly. An air roll shot brings in a balance mix of speed, precision and power. Azure RL provides a great tutorial introducing the skill.

Air Roll shots is a big transition you need to make when you start hitting Champ + ranks. This Rocket League Trainer Pack from yours truly is a 24 shot pack that introduces the player to air roll control for shots. When you were Diamond and below, you likely just moved your analog stick, boosted and flip. This pack throws in angled shots that require the player to adjust using air roll before hitting the ball. This is how advance players hit hard angle shots and a skill you must master at higher levels.

Yeeza provides a nice 20 shot trainer pack that mixes up various angels. This may seem simple if you are higher in the Champ ranks, but air roll shots is such a big foundational skill for entering champ+ level that it should be practiced and mastered.

Squishy Muffinz brings it which this 10 pack shot pack that is all about speed an precision. Getting good at this thing will build up your speed when hitting backboards.

The title says it all. This small 6 shot pack is intense with backboards that require speed and precision.

This 8 shot Rocket League trainer pack features several above the goal and off center backboards. This is a great pack for those in lower Champ ranks.

Car control in the air is an advanced skill you need to master entering the champion ranks. Players who get to the Grand champion ranks know how to adjust in mid car and can direct shots to where they want it to go with power or finesse.

French fries keeps delivering great map packs that can really enhance your car air control mechanics. This map tests your aerial adjustments. If you want to git gud at air control, give this map a try!

A very challenging map that pushing your air control abilities to the max. Squishy demonstrates how hard this map is as there are sections that he even struggles with!

A custom map that not only works on your car control, but also your speed! Race through a series of obstacles faster than The Wall chases you. If The Wall hits you, the level restarts!

Many Rocket League players play around with ceiling shots before they hit Champ and likely spend way too much time practicing. However, once you hit champ ranks this become a common skill set. It’s time to master this skill if you want to get into the higher champ ranks. G2 Rocket League Pro Kronovi breaks down Ceiling Shots and Flip Resets below in this well done 10+ minute tutorial.

This is one of the best intro ceiling shot packs out there. This is a very comprehensive 12 shot trainer pack that sets you up with doable ceiling shots.

Okay, so you got the prior two packs down. It’s time to graduate to Way’s 16 shot pack. This one starts mixing up pass situations and using your flip resets to hit goals. Trying getting 100%.

At this point in your Rocket League career, I’m going to assume you have at least some higher immediate level understanding of dribbling mechanics. It’s time to step up your dribble with challenges and there is no better than the Dribbling Challenge #2 course. You can make is extra challenge by making a run for the speedrun record.

Everyone loves flashy plays. Chupa’s post had introductory freestyling play. It’s time to take it up to the next level with these Rocket League trainer packs.

This training pack puts you in very useful advanced freestyling scenarios. What I love about this pack is that you are giving several options to be creative in how you make a goal. This video by Legend walks you through all the shot options to mix things up.

This is a classic Jhzer training pack. It literally puts up shots that you see Jhzer make in his highlights. Creator Hexzi really shows off his skills here with several triple touches and flip resets. If you want those highlight plays, start practicing this!

This is only a 7 shot Rocket League Trainer Pack, but the demonstrator in the video, Slope, shows a lot of advanced skills on hitting the ball using double touches and ceiling shots. Try to mimic Slope in the demo video here for max effectiveness.

A 10 shot pack that mixes double touches and freestyling. If you can hit shot #9 like Slop in this video, you are a god.

Flip resets is the big meta going on in Rocket League right now. They were covered in Chupa’s original post, but if you are in Champ rank you should start building familiarly with it. At high champ ranks, pretty much anyone you come across can pull them off when they need to. These shot packs will tune your skills.

This is an excellent intro pack by YeeZa. He does a great job at explaining the mechanic and this Rocket League trainer pack is more on the newbie friendly side. You can challenge this at Diamond ranks. It’s just that there are more impact things to learn before Champ rank.

Torment’s flip reset pack focuses on close range flip resets. These are good practice for when 50/50s happen or when a ball gets popped up in your direction.

At this point in your Rocket League career, you are familiar with half-flips. Half-flips utilize a mechanic called flip cancelling. We are taking the defensive application of flip cancelling and now applying it to offensive play. There is a trainer pack below for flip cancel shots below, but there is a good video from Squishy and shows how to apply this to adjust in mind air or to fake.

Flip shot cancels are an accuracy and speed skill that will keep you from losing control of your car when you need to flip to hit the ball with extra power. This 10 shot training shot pack provides several scenarios where you can practice.

When you get to Champ+ level, teammates are going to start passing you the ball during breakaways. This pack by Rocket League Pro Lethamyr sets you up for success with easy to digest pass situations.

This 10 shot training pack by Karma mixes up a number of passing and rebound situations will build good muscle memory for those entering the low champion levels.

This 14 shot pack offers both advanced rebound and redirect training for Champ+ players. There are 7 shots for rebounds and 7 shots for redirects. The rebounds need to be be set up by yourself, but the video below shows how you would set them up. Freestyling is optional :).

This training pack is made to help increase consistency on reading bounces off of the ceiling, specifically for aerial goals. You can either score the shot straight in or make a rebound for yourself, depending on the situation

In Chupa’s post, he shared a great 30 shot training pack that focused on pitch shots. That is a great pack to use at this level, but Squishy offers a new pack that works really well at learning how to make those Kuxir shots.

Squishy offers us a new training pack that focuses on wall pitch shots that can turn into shots on goals (AKA Kuxir pitch shots). What I love about this pack is that the setup for these shots are similiar to air dribbles and ceiling shots. Getting familiar with this would now allow you to have a 3 pronged approach to your wall offense, which pitches really being shots that are unexpected when they happen.

This training pack applies wave dashing to actual shots. This is a great introduction on how to start using wave dash for offense and not just for recovery

There is no training pack here, but at this level it’s time to introduce advanced wave dashing mechanics. The first introduction to multiple wave dash mechanics is the the bunny hop wave dash. Shippotv provides an introduction to it below:

Again, no training pack here, but this is another valuable tutorial from RLCS Elite player Red showing how to use the wave dash for dribbling and flicks.

Goalie training is hard to do at this level because of how the trainer is setup. You mostly want to work on wall defense, intercepting passes, and clearing wall. But there is one type of save that comes in handy below.

This packs combines ceiling shots with goalie defense. If you can get good at this you can clear the ball much further than you normally would.

This post would have not been possible without these great creators who put the hours in their game to develop these rocket league training packs. Below are all the creators used in this post and where to find them and follow on social media. If I couldn’t find their social media, I have linked to their Rocket League Tracker Profile. Give them some love by following them.

Thanks for reading and viewing and see you in-game or on our Discord server!

Rocket League Trainer Packs for Champ+ Players – About the Author